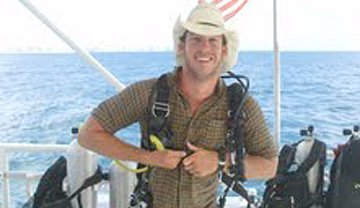 
I was going through my computer deleting stuff and I found this. I guess I wrote it after that night at Jai Alai. I thought you might enjoy it. Please excuse my language. Don’t read it out loud so ur baby can hear it.

The Future is Now etc. This is a response to a blog previously written by one, Ashley Chapman. The fact that I’m completely *Evolve* housed shouldn’t detract from the fact that I will attack her, ugh… a word for opinion that ryhmes with fact [I am really not sure how to translate this, audience-AFC]. I hope you’re following what I’m trying to do [nope-AFC]. Anyways, Mrs. Chapman claims that in the future the sport of freedivng will be dominated by athletes possessing skills far superior to those that we have now. On the other hand I propose that the journey to freediving excellence will be achieved not through superior athleticism but by devotion to the sport and, for lack of better phrasing, someone who is bat *Evolve* crazy. Let me first explain where I’ve been and where I’m coming from so you will better understand why I’m in this mindset.

I spent the majority of last night with some amazing freedivers. We met up at an undisclosed location and instantly got right to competing. Challenge # 1. Former world champion and current USA national champ in constant weight no fins, Ashley Chapman, challenged Grant Hogan, 3 time national record holder in constant weight no fins, to a race. Now, this wasn’t an ordinary race to test ones distance or speed. This race tested both distance and speed as well as foot durability, stomach constitution and resistance to possible infectious diseases. In a nutshell it was a barefoot all out sprint for over a mile to Dania Jai Alai after multiple shots of tequila. Of course I won. What followed next was a mixture of $1.00 beers, $1.50 hot dogs, *Evolve* talking, peanut m&m’s and dancing.

Flash forward to the next morning at 5:45 am. Grant has to go to the airport to get on a plane headed to California. He’s hungover. He didn’t get breakfast. He’s had a bloody mary and a few too many glasses of scotch. After watching Archer he realizes human evolution isn’t going to progress much farther than where he’s at. Seriously, he’s flying through the air, drinking scotch and he’s a *Evolve* freediving champion. Then his smile goes docile. He gets sad. How can life get better than this? It can only get worse, right? One day some little baby *Evolve* punk is gonna break his record and he’s gonna be a has-been, sitting at the end of the bar, drooling, mumbling about how he was once the greatest and he predicted this would happen while on a flight from Florida to California. Its a vicious cycle. One day you’re top dog. The next day your getting kicked out of Dania Jai Alai for being barefoot and too drunk. Vicious. The point I’m trying to make is that no way in *Evolve* is some amazing athlete going to come along and wipe us off the record books. People are gettting weaker by the day. It’s all down hill from here. Sure, some of us who are awesome will get better but everyone else is still going to suck. End of sermon.

P.S. Science backs up all these claims. My ancestors, the neanderthals, were some amazing athletes. Stronger, faster and more learned at finger painting.

Blog post by Grant Hogan of Nowheresville, NC where he’s constantly training for the apocalypse and his fated reunion with Burt Reynolds.